Let’s work together to ensure that life thrives on the Door Peninsula, its islands, and surrounding waters. Together, we will protect our lands and waters, and dare to leave a healthy environment for future generations. Your support for conservation from Washington Island to Southern Door is needed to make these conservation opportunities a reality!

Even though this year is different in so many ways, the Land Trust’s need for community support has not changed. Please make a donation to help fulfill our extraordinary land protection vision.

Your contribution makes a difference! To complete our current land protection projects, Door County Land Trust seeks to raise an additional $200,000 by the year’s end. With your help, we will meet the challenge.

While we recognize the immediate need for charitable support, worldwide, we hope you will consider supporting Door County Land Trust. Whether you choose to give $50 or $1,000—whatever the right amount is for you—your donation will help to protect the things that keep Door County special…and your gift will protect these lands forever.

There is strength in numbers. When you make a contribution to protect the peninsula, you join thousands of like-minded supporters. Together, we make a difference in Door County! 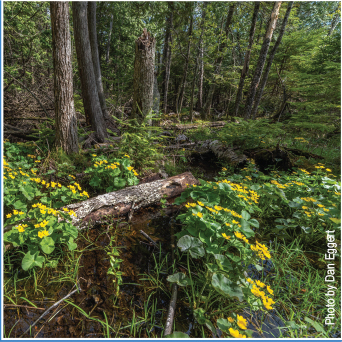 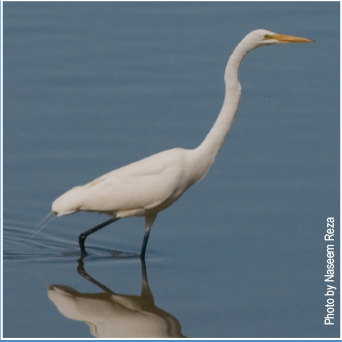 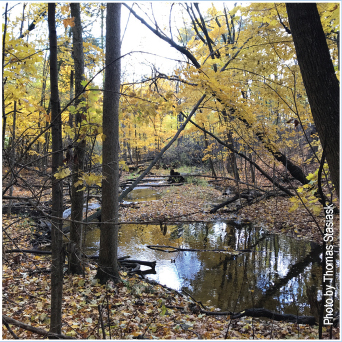 Gibraltar-Ephraim Swamp, extending from the shores of Eagle Harbor southwest toward Moonlight Bay, is part of the much larger corridor of forest, wetlands, and wildlife habitat that includes lands from North Bay south to Toft Point and Baileys Harbor. The Gibraltar-Ephraim Swamp Natural Area is one of the best remaining examples of coastal wetlands along the Green Bay shoreline—and truly, it is a place like no other.

This conservation priority area holds a lengthy list of titles; it is designated as a State Natural Area, as a Land Legacy Site, and as a globally significant Conservation Opportunity Area for Wildlife Species of Greatest Conservation Need in the Northern Lake Michigan Coastal Ecological Landscape.

Within this coastal wetlands complex the Wisconsin Natural Heritage Inventory has identified more than 36 rare animals, invertebrates, and plants, as well as five habitat types. These adjacent yet distinct habitats are what make this place so uniquely special—and so worthy of continued land protection.

The basin of the swamp parallels the shoreline of Eagle Harbor and is bound on the north, east, and south by lands at higher elevation consisting of limestone bluff. All along the swamp basin’s edges, seeps and springs bubble with fresh waters that flow into a wetland forest. The roots of these trees filter the water—and during heavy rains act as a sponge that releases water more slowly into Eagle Harbor and Green Bay.

Ephraim Creek and Hidden Springs Creek were historically known to attract suckers, smelt, and occasionally even rainbow trout; these fish may return with continued land protection, restoration, and improved access to their spawning habitat.

The swamp itself is a magical wonder of mosses and lichens rooted upon every shadowed surface and sedges and reeds forming tufted islands across the wetland. The rich, black humus soil offers fertile ground for black spruce, tamarack, and white cedar. On higher ground, following the ancient shoreline levels, upland hardwoods consist of maple, hemlock, and yellow birch.

Known breeding grounds for the endangered Hine’s emerald dragonfly are less than a mile from the edge of the swamp—a quick jaunt for an insect that jets along at 20 mph and has been found foraging here. Other rare and threatened species here include a number of birds that rely on boreal forest. For these boreal-reliant species, this area of Door County is along the southern range of suitable breeding habitat, making it the first opportunity for migrating Neotropical birds in the spring to find suitable boreal habitat for breeding. 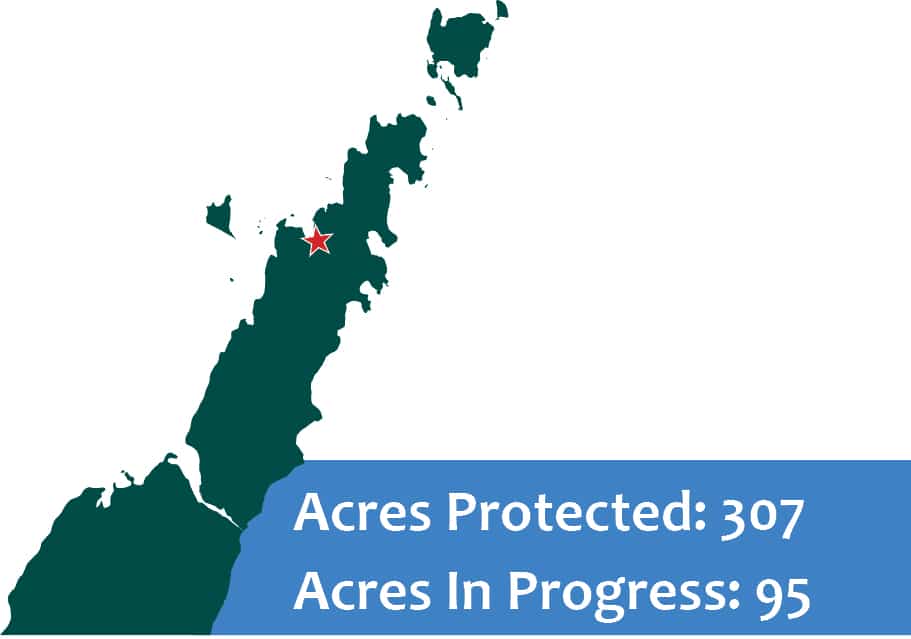 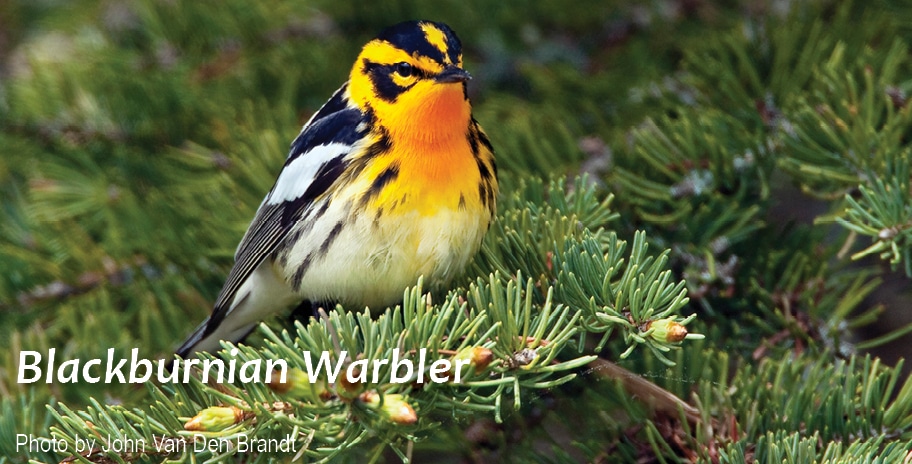 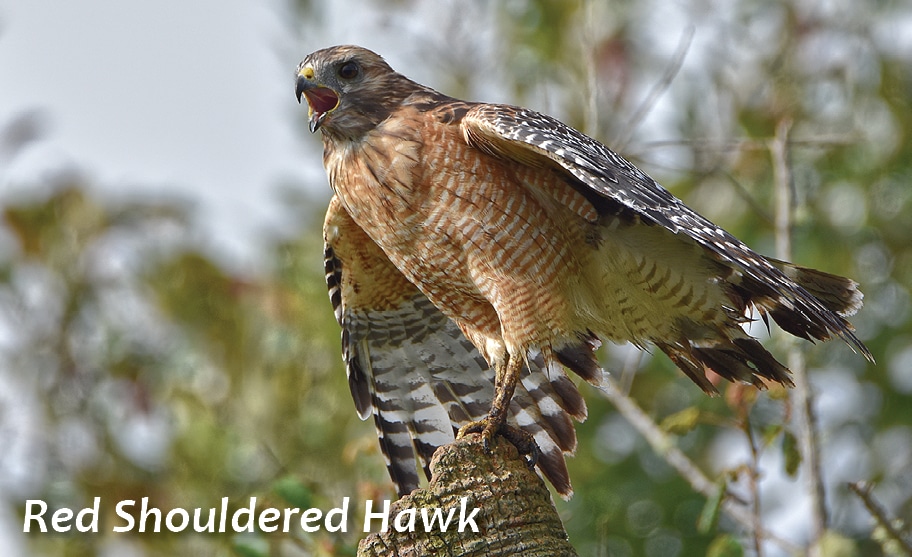 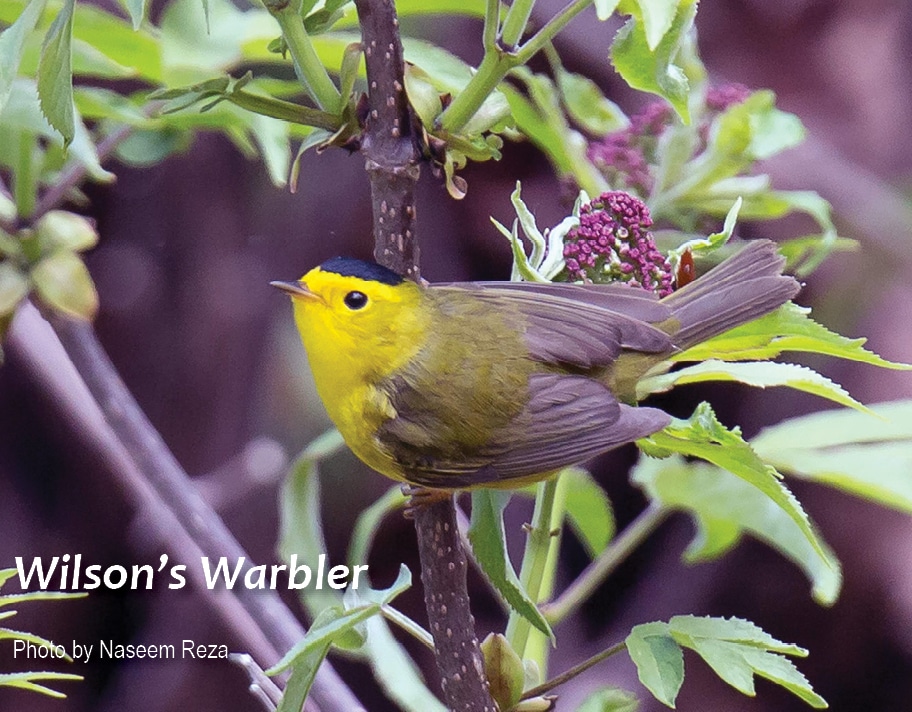 Washington Island is the largest of more than 30 islands that make up the Grand Traverse Island chain that runs from Wisconsin’s Door Peninsula to the Garden Peninsula in Michigan following the arc of the Niagara Escarpment. Washington Island’s coastal wetland areas support many rare plant and animal species including some that are not found anywhere except in these coastal wetland habitats, making preservation of these wetlands among the highest conservation priorities in the entire Great Lakes region. The Door County Land Trust works to protect these important coastal wetlands—from the boreal rich fen of Big and Little Marsh and Coffey Swamp to the freshwater estuary of Detroit Harbor to the undeveloped shoreline of Little Lake. Washington Island’s coastal wetland complex is an essential part of a larger conservation plan to protect the rare species, significant and rare habitats, and fisheries within the Grand Traverse Island chain.

Washington Island’s wetland complex holds many rare habitat types born of the unique interaction of the land and water: ridge and swale ecosystems, aquatic-emergent sedge meadows, boreal rich fens with floating sedge mats, ephemeral wetlands and streams, freshwater estuaries, and alkaline shorelines. Fens are an alkaline bog with plants specialized to grow in the high pH waters. Plants and roots intertwine to create fen mats of exceptionally rare plants. Both the fen and the plants within are considered rare.

Washington Island’s coastal wetlands are home to endangered plants and animals, including the dwarf lake iris and Hine’s emerald dragonfly, both of which are rare globally. In addition to the native wildlife, the wetlands are known to host a number of migratory birds, providing critical stop-over points. Studies have found twenty state and federally endangered or threatened species and forty-six species of special concern in Wisconsin, including animals, invertebrates, and plants, dependent upon these unique coastal wetlands. 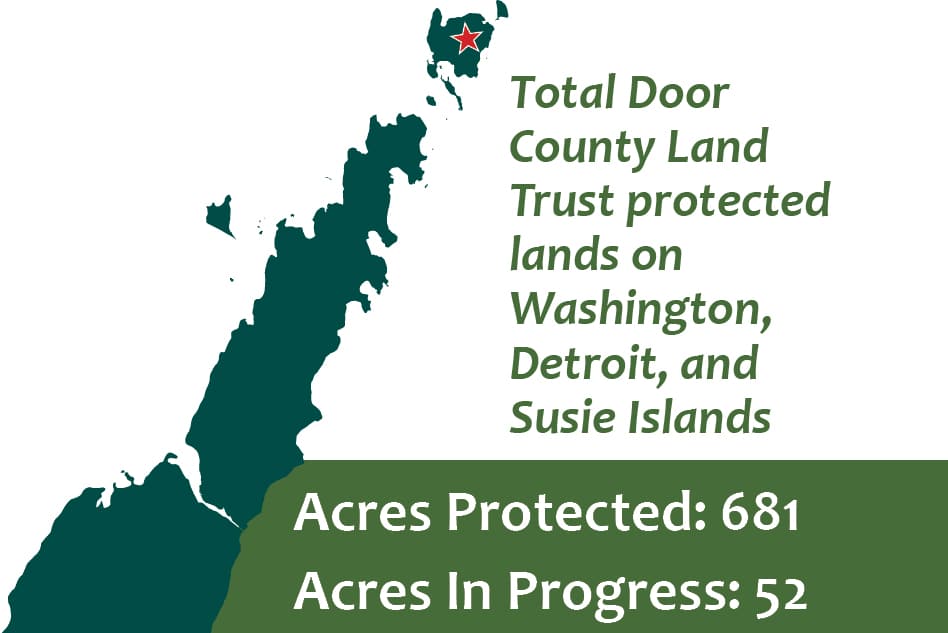 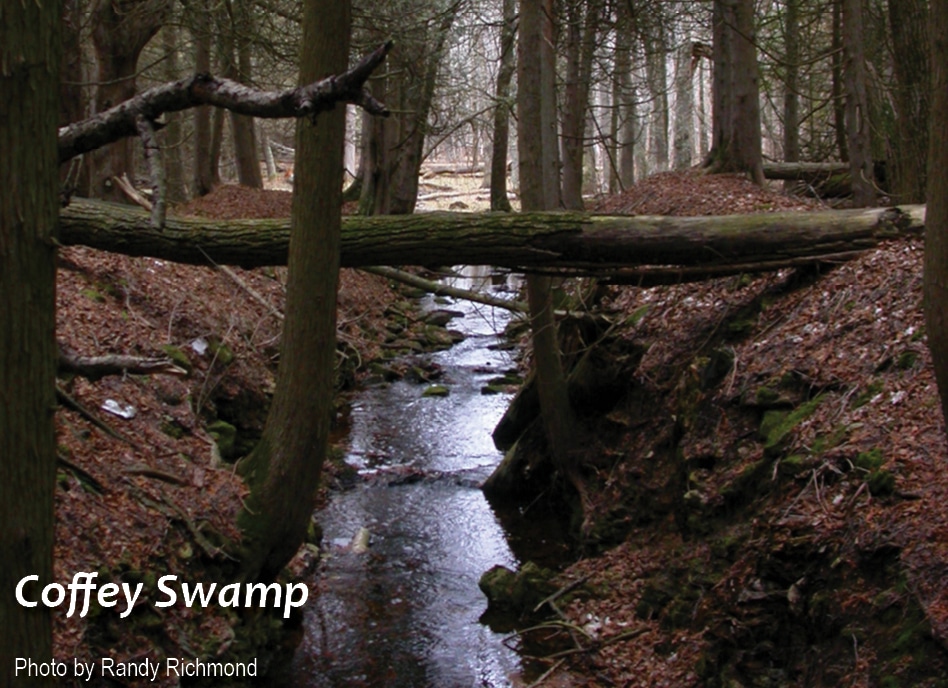 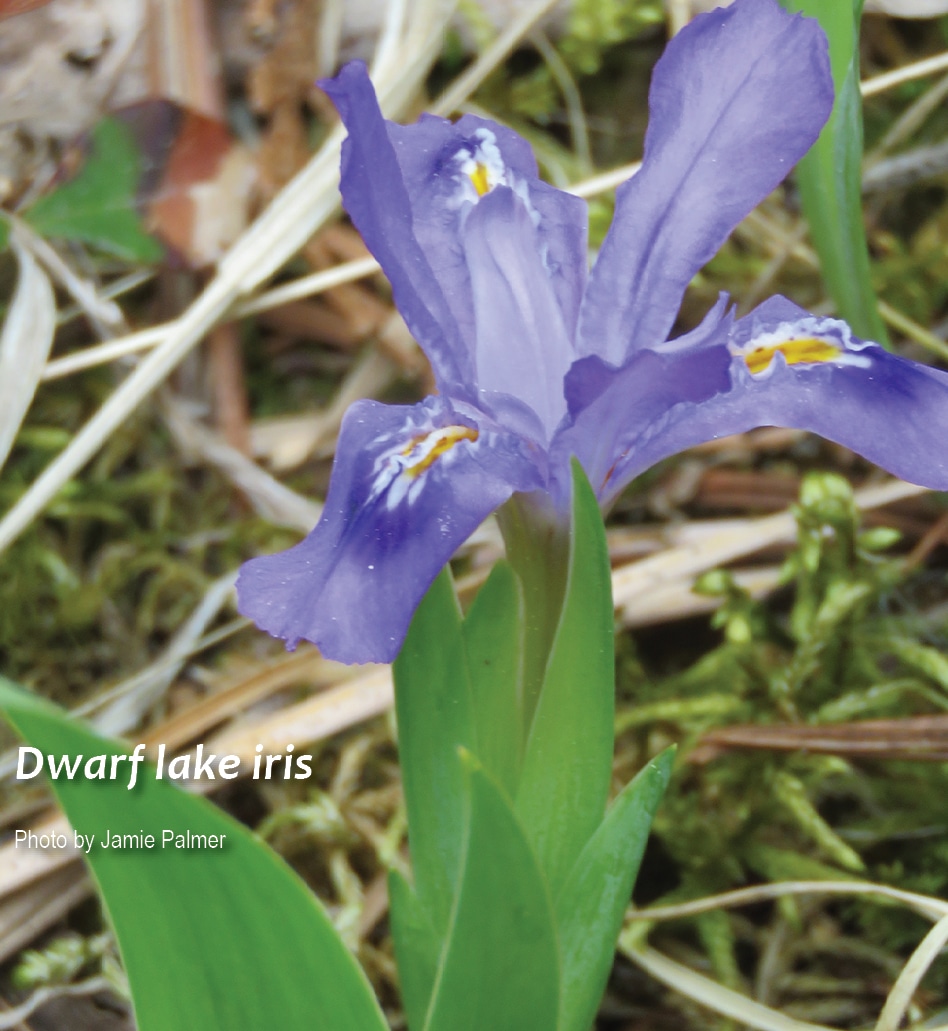 Throughout Southern Door County, small streams and creeks carry water from the center of the peninsula west towards Green Bay or east towards Lake Michigan. The health of these streams and creek beds has a significant effect on the health of both the bay and lake—and the fish that spawn in these streams. Among the most directly successful ways to improve the health of the water in Green Bay is to protect lands surrounding these creeks and streams.

Southern Door is also fertile ground—some of the best in Door County—and is home to family farmers who have made their livelihood from the land for generation after generation. While protecting stream corridors and buffering waters flowing into Green Bay is an ecological priority, Door County Land Trust’s methods for conservation in Southern Door require a more personalized approach that balances the needs of family farms and a mutually beneficial approach to conservation.

From the Delwiche-Sand Hill Pineries and its one-of-a-kind forest on the southern county line to the spit of land that defines Sherwood Point and Sawyer Harbor, countless small streams feed into the bay of Green Bay, some constantly cooled by cold-water springs, others warmed as they pass through wetlands, working farmlands, or forests. Most of these creeks face a twofold threat—sedimentation and an excess amount of nutrients. A targeted conservation approach that focuses on protecting the buffers along streams and wetlands aims to improve the quality of waters feeding into Green Bay.

From Potawatomi State Park south to Gardner swamp, woodlands and wetlands offer a variety of habitat for wildlife. Cold-water and warm-water creeks attract spawning fish such as suckers, northern pike, whitefish, walleye, and large bowfin. River otters, a plethora of songbirds, migrating waterfowl, and state-threatened Red-shouldered Hawk are found along the coastal forests consisting of sugar maple, basswood, hemlock, beech, white cedar, green and black ash, red oak, aspen, and paper birch. Below your feet, you may find sensitive fern, marsh marigold, blue flag iris, and sedges such as the rare handsome sedge (yes, that is its name!), as well as the state-threatened long-spurred violet. 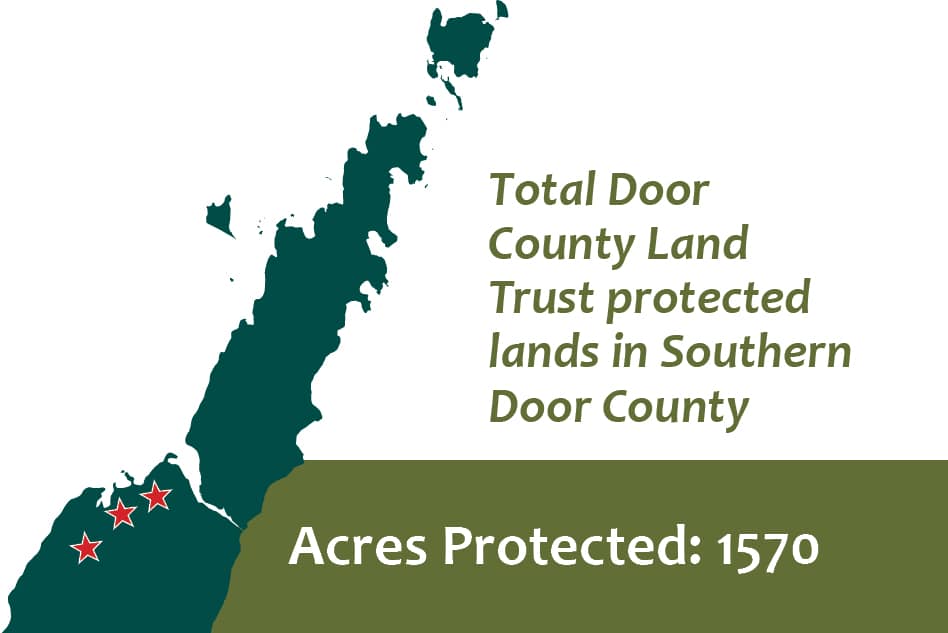 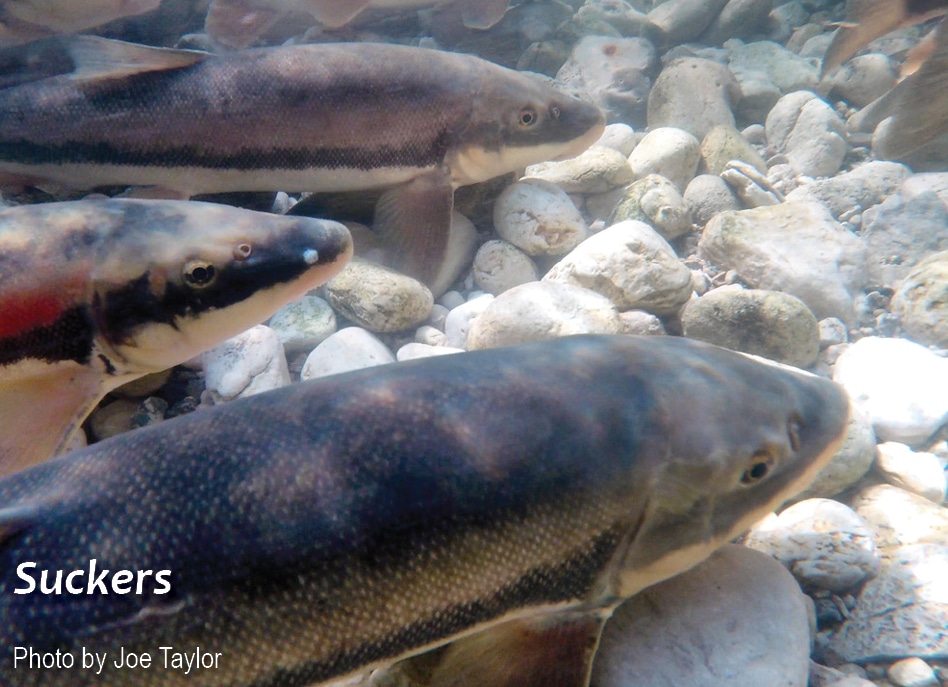