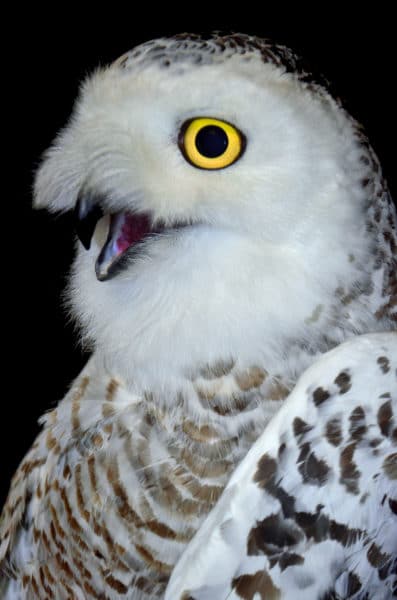 Fond du Lac, getting ready for her transmitter. (©Rich Armstrong)

“Snowy owls don’t know about coronavirus, fortunately — they only know that the days are lengthening toward spring, and the tug of the Arctic is getting stronger and stronger. Some have already started migrating back north, and may soon be out of cell range for the summer. It’s a welcome reminder that, however dark and frightening things may look to us now, there are older, deeper, richer forces at work, and from them we may take comfort and inspiration.”

Door County Land Trust board member Mark Martin, co-resident manager at the Madison Audubon’s Goose Pond Sanctuary alerted us to a story that would have otherwise gone undetected. Thanks to modern technology, Project SNOWStorm is tracking snowy owl movement over Chambers Island, even though travel to the island is impossible due to floating ice.

Fond du Lac, a female snowy owl, was caught on February 23rd near Lake Maria in Green Lake County. She was fitted with a cell phone transmitter that includes a GPS tracking system by volunteer Gene Jacobs.  She is now being tracked, along with 14 other snowy owls from North Dakota to the eastern Great Lakes and Canada. Since originally being tagged in Green Lake County, Fond du Lac has traveled north to Michigan’s Upper Peninsula before traveling back down through the bay of Green Bay, where she has spent the last several days. This past weekend, Fond du Lac was recorded visiting Chambers Island, home to Door County Land Trust’s largest nature preserve at over 800 acres! 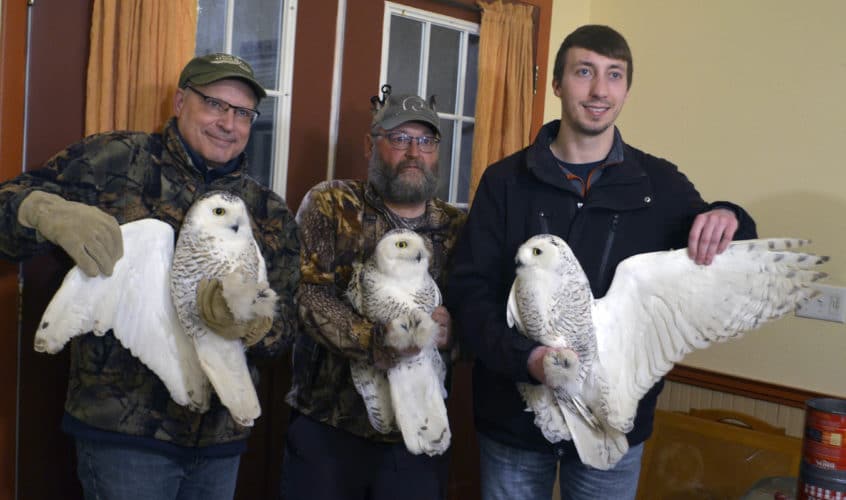 It was a cold and sunny Sunday afternoon in Green Lake County as volunteers from the Madison Audubon and Horicon Marsh Bird Club ventured out in search of snowy owls. Mark Martin and researcher Gene Jacobs located and helped catch three snowy adult female owls late that afternoon as the sun fell. The largest female, weighing in at 4.75lbs, was fitted with a transmitter and named Fond du Lac – which means far end of the lake – as a nod to the Fond du Lac County Audubon Society who sponsored the transmitter. Mark and his wife Sue gave her the Native American name of “Lake Owl,” which is quite fitting since we now know she likes lakes! Fond du Lac was the second of two snowy owls tagged in Wisconsin this year. Columbia, the other Wisconsin snowy owl being tracked, was caught by Jacobs at the end of January near Audubon’s Goose Pond Sanctuary in Columbia County, assisted by the Martins and colleagues with Madison Audubon.

On March 10th Fond du Lac was recorded in farmland about a mile southeast of Green Lake, and she kicked off her Wisconsin lake tour that evening. According to data, Fond du Lac traveled to Rush Lake, then Lake Poygan and Winneconne, then Lake Winnebago, before heading on to Green Bay. While visiting Door County, Fond du Lac stopped northwest of Sturgeon Bay on March 14th before turning around and returning to Lake Poygan on the 15th. After resting for a few days, she headed back up north stopping at Partridge Lake again before soaring to Michigan’s Upper Peninsula at the tip of the Keweenaw Peninsula, adjacent to free ice on Lake Superior. On March 22nd she flew southeast again, heading over Lake Superior toward Green Bay. This repeating north/south flight behavior is normal for snowy owls and even has its own unique ornithology term,  zugunruhe, which is German for “migratory restlessness.” According to Project SNOWStorm, a collaborative research group focusing on snowy owls, zugunruhe is “brought on by hormonal changes triggered by both the bird’s internal circadian rhythms and the changing day length. Often it’s a strong wind from the right direction that prompts an exploratory flight.”

Door County Land Trust is excited to share Fond du Lac’s story, especially because she’s spent several nights on and around Chambers Island! On the morning of March 31st she was recorded drifting southwest on the ice at about .4 miles per hour (her last recorded location at the time this was written), in Southern Door County close to Sugar Creek County Park, not far from where she was she was on March 14th. Chambers Island is recognized by conservation partners at US Fish and Wildlife Service, WI Department of Natural Resources, and The Nature Conservancy to be of great significance within the North American migratory bird flyway for more than 170 species of birds. The island offers a much-needed rest stop that is free of common hazards to birds, but also offers a diversity of forest and wetland habitats necessary for birds to forage and nest. Fond du Lac’s travels are a testament to the health and beauty of the peninsula and surrounding islands.

If you were curious about the other Wisconsin owl, Columbia, she is on the move too! On March 7th the two Wisconsin owls were only 37 miles apart, but while Fond du Lac floats on the Door Peninsula visiting its nature preserves and islands, Columbia has ventured northwest by 590 miles and landed in North Dakota. It is interesting to see the difference in individual owls. Just like there are differences in people who get excited about seeing the waters of Door County while others visit the prairies of North Dakota. March 31st was Fond du Lac’s sixth day on the bay of Green Bay. It will be interesting to see when and which route they will take, as the owls head north to the artic. We wish them safe travels and hope their transmitters keep calling in. Door County Land Trust is excited to continue to track Fond du Lac’s visits to the island, where she and many other migratory bird species benefit from the Door County community’s conservation work. If you want to follow Fond du Lac’s migratory adventures, along with 14 other owls and the Project SNOWstorm news, click here.

Posted in Door County: A Place Like No Other, Home Page feeds, In The News