To the avid hiker, ecologist, or wood thrush, there is much more to a forest than just trees. From the very top of the canopy, to the secret recesses of soil, countless life forms occupy and embody the fundamental fabric of the forest. Trees are a minority (though crucial) part of the flora and function as a foundation for countless other species. As in life, it’s easy to focus on the obvious and miss the essence. Too often we literally can’t see the forest for the trees. At least once a week, walk in the spring woods. It is rewarding, humbling, and eye opening. See, hear, and smell the gradual reawakening of this living community after the long dormancy of winter. 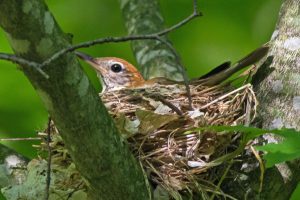 The spring is alive with the sound of music… as migratory birds return from the south to nest.  Their greatest hits include some of my favorite songs: hermit thrush, wood thrush; great crested flycatcher; chestnut sided warbler; black throated green warbler; red-eyed vireo; and ovenbird.  Some nesting birds are year round residents, the ever present chickadees, nuthatches, and downy woodpeckers, for example.

Bird songs and calls have echoed among hemlocks, cedars, pines, and maple for millennia.  Members of Door Country Land Trust have been instrumental in keeping this music vibrant and alive… simply by maintaining quality habitats in which our fellow creatures can feed and nest. 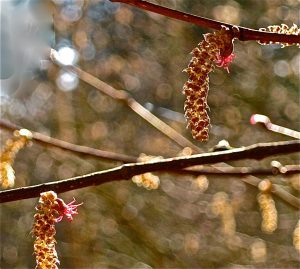 About 97% of the vegetation of a forest is “non-tree.”  There are many hundreds of species of flora, many of which are beautiful, showy; and bloom only in the spring.  Their names can be descriptive and/or just weird.  For example:  large flowered trillium, Jack-in-the-pulpit, dutchman’s breeches, dog tooth violet, doll’s eye, blood root, gay wings, and gold thread.

But some spring flowers are almost invisible.  Hazelnut, a member of the birch family, is an easily missed, but common shrub that blooms in spring.  It’s recognized by the enlarged catkins (drooping downward, unisexual, but usually male) producing large amounts of pollen. But look closer and you can see tiny scarlet red female flowers at the ends of some buds.  Unlike trilliums or hepatica, these spring flowers are not showy.  Why?  Like grasses, alders, and willows, they are wind pollenated… hence no need to attract insect pollinators, so why waste energy producing showy flowers with colorful sepals and petals? 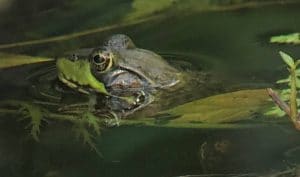 Among the most vibrant sounds in the spring woods are those produced by frogs.  Perhaps the earliest spring mating calls are made by wood frogs.  These have been described as sounding like a gathering of miniature ducks quacking.  Like most amphibians they reproduce in water, so will be found in ponds shortly after the ice melts.

One day while sitting on a bench at a Land Trust preserve, an object landed on the brim of my hat.  Carefully removing the hat, I solved the mystery… a gray tree frog had landed there.  It jumped to my knee, sat for a moment, then leaped into a nearby fir tree and disappeared.  Gray tree frogs during spring mating, produce a series of high pitched musical trills.  They can match their surroundings, for example turning green when among foliage, or changing color with temperature change.

In summer our frog music will have faded away into memory… as Robert Frost, in “Hyla Brook,” put it: “like a ghost of sleigh-bells in a ghost of snow.”  For now… Experience the songs of Spring, including our little Hyla’s (gray tree frog’s) high pitched “sleigh bells” song.

Dale Goodner was a Naturalist at the Green Bay Wildlife Sanctuary  before moving to Peoria, IL, where he worked for Peoria Park District.  He served as Chief Naturalist at Forest Park Nature Center, then became Supervisor of Environmental and Interpretive Services. He and his wife, Mary (both alumni of UWGB), returned home to northeast Wisconsin upon retirement and now live in Algoma.